Climate change in the class room

With the demonstrations of the Fridays for Future movement, children and young people all over the world have been reminding people of their responsibility to the planet. These protests have also brought a lot of momentum to the political debates on climate change. It was only thanks to the protests that many people realised how important climate protection is for the preservation of the livelihoods of future generations. At the same time, however, the demands on teachers to be able to answer all of their students' questions are increasing. Why is climate change happening? What is the greenhouse effect and what does it have to do with rising temperatures? What can we do about climate change? Why is just driving less not enough? Why do we also need political solutions? Which political solutions could work? These are not always easy discussions for teachers, because they range from understanding the physical principles of climate science to the social, economic and political questions associated with combating climate change and its consequences.

Number of climate courses and number of children that have taken part in them.

The pupils gain knowledge on climate change and can reflect on their own decisions and those of their parents.

Climate education at an early age allows long-term behavioural change in the children and young people as they grow up and promotes solution-oriented ways of thinking about climate change.

The climate on Earth has always been changing. But as a result of humans and our actions on Earth, the climate is changing faster and more drastically than ever before. Transport, agriculture, the production of goods, deforestation and many other activities emit greenhouse gases such as carbon dioxide (CO2) or methane (CH4). This increases the greenhouse effect and the global average temperature rises. According to climate researchers, the global average temperature is likely to rise to 5.4°C if no action is taken and greenhouse gas emissions keep rising annually (IPCC, 2018). This can result in weather extremes, floods, droughts or hurricanes, with negative consequences for humans, animals and plants. With the Paris Climate Agreement of 2015, the global community has therefore set itself the goal of limiting the rise in the global mean temperature to 1.5 degrees Celsius. Over the past four years, global greenhouse gas emissions have continued to rise, and so has the annual global temperature. In Germany, too, avoiding greenhouse gas emissions is a major challenge. In all probability, Germany will not achieve its target of reducing greenhouse gas emissions by 40 per cent by 2020 compared to 1990. In 2018, greenhouse gas emissions in Germany were 865.6 million tonnes, according to a recent estimate by the Federal Environment Agency (2019). Compared to the previous year they have declined but not to the extent as the German government had intended. Climate change has become a challenge for society as a whole, to which political and economic as well as cultural solutions must be developed. To this end, it is important that the topic is embedded in school curricula so that children and young people can at an early age find answers to their questions and develop solution-oriented thinking and climate-aware behaviour in all areas of life.

With your donation today, primary school children in Germany can take part in a course on climate change. In 90 minutes, the children work out together in which areas of life greenhouse gases such as carbon dioxide are emitted. In a playful way, the lessons convey basic knowledge about climate change as well as solutions and options for action in the areas of mobility, nutrition, heating and consumption. The lessons are held by specially trained environmental educators, who visit the participating schools and teach the respective courses. The contents are coordinated with the school curriculum and thus complement the lessons in general knowledge. A workbook accompanies the lessons and also offers the opportunity to deepen the topic at school later on and to discuss it with parents at home. As a result, primary school children deal with climate protection issues at an early age and learn to make environmentally sound decisions. 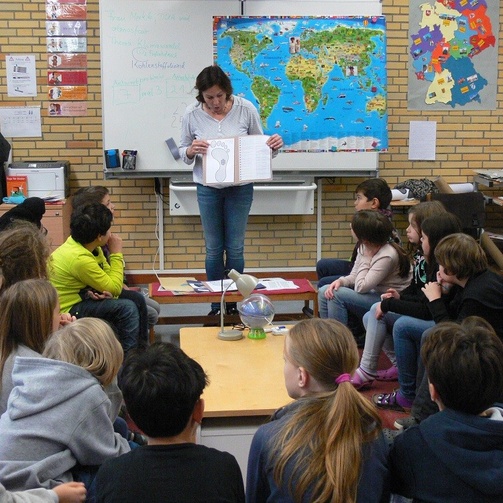 As one of the richest countries on earth, Germany has one of the largest carbon footprints. Per person per year, 11 tonnes of carbon dioxide were emitted in 2016. That is more than five times than the ecological acceptable level (Federal Environment Agency, 2018).