Being able to speak the language is the basis for participation in society. Sharam from Iran would agree: Without German language skills he cannot find a training position, a job or an opportunity to actively participate in everyday life. His experience with potential employers reflects this: Despite his 8 years work experience as a carpenter in Iran, it seems that he does not have a chance for a job or a vocational training in Germany as long as he does not have sufficient knowledge of German. He knows that he now has the chance to learn German very well and to find a job. Fortunately, there are many opportunities in Germany to attend language courses. But that alone is not enough. After all, he cannot just leave his young son alone at home. In order for him to learn German quickly, he needs childcare for the time he spends attending language courses. Without a job, of course, he cannot afford this.

Access to education and language courses for people that are excluded from educational programmes.

Volunteer teachers teach German. At the same time, the children of the participants in the course are cared for.

Number of minutes of language teaching and people that attend a language course with childcare.

People get to improve their German language skills.

Better participation in society and educational and job opportunities for people who have been through the experience of seeking refuge.

Many people are forced to leave their home to seek refuge in other countries. This is particularly the case when war is raging in their countries of origin, or when governments do not respect people's civil rights and freedoms or when they are politically persecuted. In 2018, there were 1.1 million refugees in Germany alone who received protection (Integration Research News, 2019). With the Geneva Convention, an international agreement was created after the Second World War that offers those seeking asylum in times of war the opportunity to be admitted to other countries. At present, 196 countries have acceded to the Geneva Conventions. But there are also many people who have to leave their country for reasons that are not, or at least not clearly, covered by the Geneva Convention, or who have not yet been officially recognised as entitled to asylum. These people have an unclear residence status. People with an unclear residence status and little chance of being able to stay in Germany in the long term have restricted access to free educational opportunities such as language courses. This especially affects people from Afghanistan and West-African countries. The residence status reflects whether a person is still undergoing the process of seeking asylum (temporary residence permit) or the expulsion is stopped temporarily (toleration). In the district of Breisgau-Hochschwarzwald, 1,590 people live with a temporary residence permit and 585 with a toleration (Landesamt Breisgau-Hochschwarzwald, 2019).Due to their unclear residence status, these people also have greater difficulties in finding a language course that they can pay for with their often limited financial resources. In addition, there are often not enough courses in rural areas or attending a language course is difficult to reconcile with looking after children. However, adequate language skills are particularly important for successful education and further training and pave the way for self-reliance in a new country. In order to enable such people to participate in society, Bildung für alle e.V. creates access to education where it has been lacking up to now.

Your good deed today means that free German courses from basic literacy to B2 level will be run by volunteer teachers. In particular, they are intended to give adult refugees with unclear residence status and children, and thus difficult access to free language courses, the opportunity to improve their German skills. At the same time, childcare is provided to make it easier for families to participate and to actively involve their children in the programme. This allows participants to concentrate completely on language learning while their children are being looked after. The good deed helps to counteract the social isolation of people and brings people from different cultural backgrounds together. 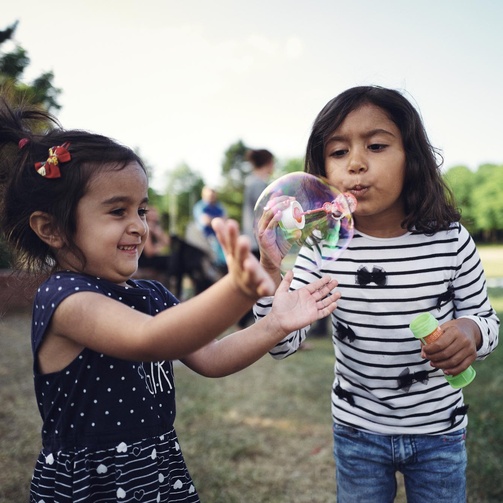 With about 82 million inhabitants, Germany is the most populated country in the EU. 1.1 million people are recognised as refugees.