Day 6
One hot meal for a malnourished child in Nairobi

We are fed up with being hungry!

Hot meals for children in a Nairobi slum

At seven months old, Teresia only weighed 5.7 kilograms when her mother took her to the clinic for the first time. The normal weight at that age is 7.6 kilograms. The doctors immediately included her in the local food programme. At first, Teresia was fed with a highly nutritious paste made from peanut butter. Later, she and her three elder siblings got a hot meal every day at Mathare Valley’s nutrition centre. In a variety of courses, her mother learned to cook a healthy meal for her family even using cheap ingredients. But her mother also learned a lot about hygiene and health care. Now, at almost two, Teresia is at the normal weight for her age. She is a healthy as well as happy child and is well-provided for and has a chance for a vigorous life.

Hot meals for children in the Mathare Valley slum in Nairobi

Number of meals prepared and provided to children in need.

Children are provided with nutritious food and suffer less from undernourishment and malnutrition.

Long-term improvements in the health and thus the future prospects for the children of poor families in the Mathare Valley slum.

Eastern Africa is regularly plagued by drought periods. These often result in extreme fluctuations in the price of staple foods. International trade relations also impact local food prices. And this impact is rarely beneficial for the people living in the Mathare Valley slum and tends to result in massive variations in the price of staples. This in turn impacts the poorest people in the Kenyan capital the hardest. What little money they have is often not enough for the bare minimum such as food for the day. In the families it is the children in particular who suffer. For them, the effects or later consequences of malnutrition are especially dramatic. Children are often stunted and are more susceptible to infections with long periods of illness. This then results in poor health later on in adult life.

With their support, the German Doctors seek to combat the impact of undernourishment and malnutrition in children. The youngest inhabitants of the slum are supported at the nutrition centre according to their age and the degree of malnutrition. Infants that are not or insufficiently breast-fed are given a milk substitute. Older children are provided with special nutritional foods under medical supervision. Even children who are just slightly undernourished or who are in danger of slipping off into malnutrition are also included in the programme to give them the chance for developing healthily. The education of mothers on a wholesome and varied diet are also an important part of the efforts to reduce the key causes of malnutrition in the long run. 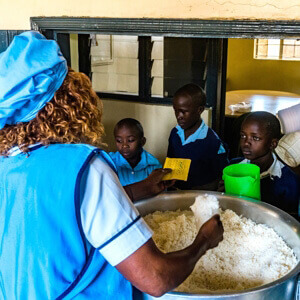 Nairobi is the only city in the world that has a national park within its boundaries. It also is the home of one of the world’s largest slums, Kibera.