Day 5
2.5 square metres of blooming meadows for butterflies in Thuringia

How long has it been since you have last seen a pale clouded yellow butterfly flitter across a meadow? Or a lesser purple emperor with its bluely shimmering wings? The number of butterflies has declined massively in the last 30 years. Studies suggest a decline of up to 75 per cent. (Hallmann et al., 2017) And this is already having an impact on birdlife: Many birds, such as swallows or swifts need insects to survive. A wide variety small birds rely on insects especially while rearing their young. But also our own nutrition is heavily reliant on insects: 91 of the 107 most commonly cultivated crops are pollinated by insects to a more or lesser degree. Strawberries, cherries or rape seed produce the highest yields when they are pollinated by wild bees or other insects.

Meadows rich in flowers and herbs for the protection of endangered butterflies and other insects.

The NABU Foundation purchases the Windknollen meadows and thus guarantees the continued grazing by a local shepherd which is needed to preserve them.

Number of square metres that are bought and conserved in the long term.

The shepherd can continue to graze the land and the biodiversity at the Windknollen is actively protected.

Protection of the Windknollen is maintained in the long term and biodiversity is protected.

In order to preserve the special biodiversity of the Windknollen, a continuation of grazing is necessary. In order to guarantee this in the long term, the NABU Foundation National Natural Heritage has negotiated the purchase of the 195 hectares at the Windknollen with the previous owner, the State Development Corporation of Thuringia. Today's good deed helps the foundation to purchase part of the area and put it under nature protection status. Until 2021, the NABU Foundation will purchase this natural paradise. As the owner, the foundation can secure the grazing of the traditional shepherd in the long term and thus preserve the special biodiversity of the Windknollen. This will protect another piece of land that is home to a number of endangered species.

The main reason for the loss of biodiversity among insects such as butterflies and bees is the constant intensification of agriculture and of pesticide use, overfertilisation, drainage of wet meadows and the conversion of grassland to arable land. Even in nature reserves, conventional agriculture with all its problems of pesticide use and excessive fertilisation is generally permitted. Often there is also a lack of proper management to preserve the long-term diversity of flora and fauna. Without grazing, species-rich meadows become overgrown – sensitive plants and numerous insects are suppressed in favour of just a few species. The Thuringian nature reserve of Windknollen is threatened by precisely this phenomenon. A very high species diversity has been preserved here, as no pesticides or artificial fertilisers have been used so far. Instead, a flock of sheep has regularly grazed the wide, species-rich semi-arid grasslands over which butterflies such as the pale clouded yellow, the greater and lesser purple emperor or the Adonis blue have been fluttering. Now 195 hectares of this nature reserve are for sale by the previous owner, the State Development Corporation of Thuringia. If a new owner were to terminate the cooperation with the local shepherd, this would be the end of the immense biodiversity and the meadows would overgrown within a few years. 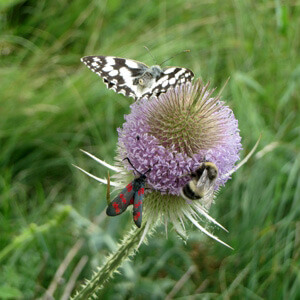 Germany is very densely populated. Much of the land is being used for agriculture. Studies show that even within nature reserves, biodiversity has decreased by 76% since 1990 (Hallmann et al., 2017).