Day 2
Five days of schooling for a child in Afghanistan

Curiosity and desire for knowledge for a better future

Education for girls and boys in northern Afghanistan

It is not self-evident that 9-year-old Basmina is able to attend the Khazani School. She was born in Zazai, a village in the Afghan province of Kunduz. Before the school was built, only the boys received an education, in tents, while the girls had no opportunity to attend classes. "My father is a farmer, and my mother is a housewife. Both wish for me and my siblings that we will have a better future later on. I like going to school very much. My big dream is to become a doctor," says Basmina. At the urging of the villagers, the school was built in 2003. Since then, girls have also had access to education. Approximately1,200 pupils attend the Khazani School every year. At the same time, the school is a meeting place for different cultures, as many refugee children also go to school there. The children thus contribute to cultural understanding and a peaceful future for Kunduz.

Primary and secondary education for girls and boys in Kunduz province in northern Afghanistan.

Number of teaching days for all participating school children.

School children, especially girls and poor children in the Kunduz region, receive primary and secondary education and are given opportunities for a brighter future.

The educational situation for school children in the Kunduz region improves. Reconstruction and peaceful coexistence in the region is encouraged.

Afghanistan has not been at peace since the late 1970s. The interference of major Western powers and the Soviet Union led to repeated uprisings. After the Soviet Union withdrew from Afghanistan, a civil war broke out in 1992, bringing the Taliban to power. Afghanistan became an Islamist emirate. In 2001, the USA launched a military operation in Afghanistan and overthrew the Taliban. Since a new government was installed, the Taliban have been in armed conflict with it. The civil war and Taliban rule have destroyed many schools in the country. Girls and women, in particular, were almost completely excluded from attending school (DAAD, 2020). This still has an impact today. According to a study by the United Nations Children's Fund from 2018, around 3.7 million children between the ages of seven and 12 do not attend school in Afghanistan (UNICEF, 2018). The report shows that girls are particularly disadvantaged. On a national average, 60 per cent of children who do not attend school are female. In upper secondary education, for example, the share of boys is actually twice that of girls. At around 70 per cent of the population, the illiteracy rate is one of the highest in the world. The reasons for the poor level of education in the country are manifold and complex: continuing political conflicts, poverty, discrimination against girls, early marriage, forced migration, a lack of teachers and poorly equipped schools. All these factors contribute to keeping many children away from the classroom. Since the end of the Taliban regime, however, there has also been progress, especially in recent years: 37 per cent of female and 66 per cent of male youth can now read and write (Human Rights Watch, 2017).

Your donation today will contribute to providing a child in rural northern Afghanistan with eight days of free and qualified teaching. The school programme is structured so that girls study in the morning and boys in the afternoon. The school follows the national curriculum. Learned skills such as reading and writing are passed on within the family. Normally schools in Afghanistan remain closed during the winter months. But now, there is a voluntary winter course for all pupils. The Khazani School expands the limited learning opportunities for girls and contributes to reducing the gender gap in educational opportunities. Moreover, former pupils often come back to the school to work as teachers. 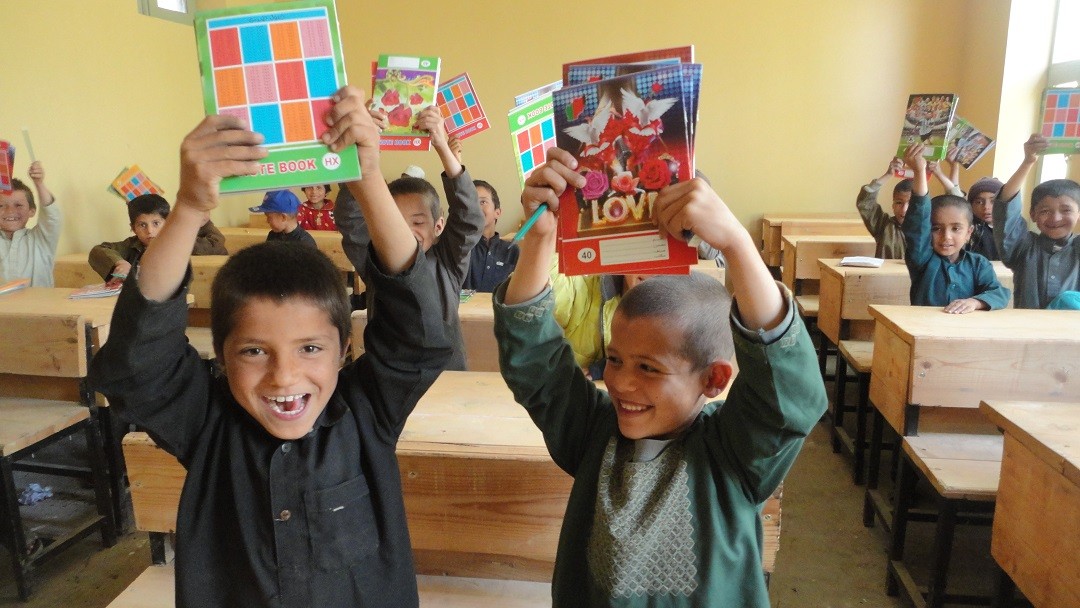 Afghanistan is a multi-ethnic country with a multitude of cultural groups. A total of 49 languages and over 200 different dialects are spoken in the country.

24 GOOD DEEDS – here’s how it works. Everything about the charity advent calendar at a glance.

The 24 GOOD DEEDS Advent Calendar as a gift idea for companies.

The 24 GOOD DEEDS Advent Calendar in the classroom – including free educational material.

Here you can subscribe to our newsletter that is sent four to six times per year.