Day 4
One meningitis vaccine for a child in Burkina Faso

In the remote province of Sourou in north-western Burkina Faso, unpaved sandy tracks connect one place with another. In the rainy season they are flooded and in the dry season they are dotted with potholes. The region is structurally weak. Most people live from agriculture. Sourou borders the neighbouring country of Mali. In addition to the widespread poverty and the risk of terrorism from nearby Mali, there is another problem: Sourou is located in the so-called 'meningitis belt'. The meningitis belt is the region south of the Sahara in which there is an increased risk of meningitis infection between December and June. The region is repeatedly affected by the disease, claiming many lives. Many people face up to the often adverse circumstances in Sourou province and try to find ways to reduce poverty and high infant mortality in the region. It is not for nothing that Burkina Faso is also known as the 'land of the righteous'. Brave women have joined forces here to campaign for more education and health care for children. With plenty of passion and patience they are committed to improving the living conditions of their children and to ending meningitis.

Local NGO ASMED conducts campaigns on health care and vaccination against meningitis. Health cards are distributed to document the vaccination.

Number of children that have been vaccinated against meningitis.

Number of cases of meningitis among children in Sourou province comes down and the documentation makes it possible to track when a refresher vaccination is needed.

Meningitis is a life-threatening infectious disease. Meningitis causes inflammation of the meninges of the brain or spinal cord, i.e. the membrane around the central nervous system. The disease can be caused by viruses, bacteria or other microorganisms. In the Sourou region, the disease is commonly caused by a bacterium (Neisseria meningitidis). Similar to a flu virus, it is spread by human contact (droplet infection). In other words, sneezing, saliva or other bodily fluids of a sick person are sufficient to cause infection. Within a few days people experience severe head ache, neck pain, fever, diarrhoea, vomiting and drowsiness. Without medical treatment, meningitis can lead to severe brain damage within a few hours and can be fatal. According to the World Health Organisation (WHO, 2018), around 30,000 people per year contract meningitis in the meningitis belt. Especially the presence of dust and wind during the dry season and the fact that many people live together in confined spaces under poor hygienic conditions lead to a rapid spread of the disease. In 2010, Burkina Faso launched a major vaccination campaign in which 12 million people were vaccinated against meningitis. According to a recent study, refresher vaccinations are required after 8 years, but have not yet been implemented. Especially children who were born after 2010 or were under 4 years old at that time have not been vaccinated and are therefore at risk of contracting the disease. Often the state does not have the necessary financial resources and structures to carry out these refreshers.

Your good deed today will provide a child in Burkina Faso with a meningitis vaccination. As part of a children's health care campaign, Health Cards (similar to the International Yellow Card) will be distributed and vaccinations against meningitis carried out in 38 health centres in Sourou province. The health cards should enable parents and medical staff to track when vaccinations were given, what they were given against and when they need to be refreshed. The campaign aims to inform families about important preventive medical check-ups for their children and to show them that prevention can help avert serious illness and even premature death from their children. To this end, SAIDA works together with the local clinics in the medical districts and with the women's organisation ASMED (Association pour le Soutien aux Mères et Enfants Déshérités), which has been active in child welfare since 2004 and is campaigning against female genital mutilation. 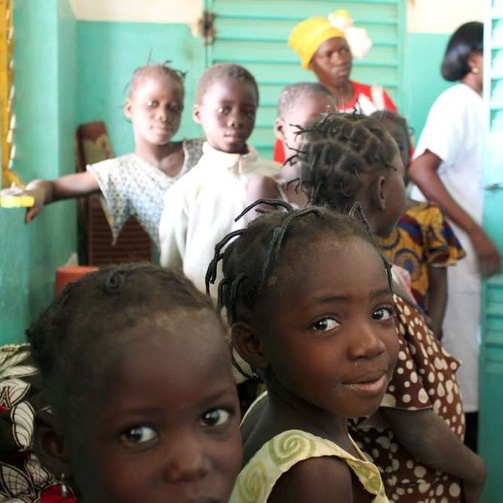 To the Mossi, the largest ethnic group in Burkina Faso, crocodiles are sacred because they are considered to be bringers of good luck. There is a crocodile the 1,000-franc coin.