Healthy living because of clean water!

The views of the landscape in the mountainous north of Yemen are impressive. Steep mountains full of terraced fields alternate with deep gorges and valleys. Impressive but also challenging for the local population – especially in terms of water supply. From the courtyard of the small village school, groups of women walk in single file along the narrow, stony paths in all directions, up to their houses in the villages. They have to arrive at home before dusk and cross a gorge – known locally as the Wadi – to get there. That means first 600 metres down, then through the stony valley and finally 700 metres up again. Today, however, each of these metres is particularly worthwhile because they carry a colourful cardboard box on their heads. Inside is their new water filter. As filters were being handed out, the women listened attentively to the instructions on how to install them. They were clearly delighted, because the water filter will save their families from much illness in the future and give them a clean supply of drinking water.

Clean water for families in Hajjah and Ibb in Yemen.

Local NGOs buy water filters and distribute them to the disadvantaged families for water treatment.

Number of water filters that can be distributed to families as a result of the good deed.

Families – and their children in particular – suffer less from diarrhoea and other diseases.

The state of health of the families is improved long-term, resulting in better opportunities for education and generating income.

In 2015, a civil war began in Yemen, which continues to this day. The original trigger for the violent clashes was that the people living in the northwest of the country, who mainly belong to the Huthi tribe, took control over the capital of Sana’a and further parts of the country. Reform processes that started during the “Arab Spring” have stopped. A regional military alliance, led by Saudi Arabia, interfered in the conflict with air attacks and a sea blockade in order to support president Hadi against the rebels. According to reports on Deutschlandfunk radio (2019), the war has reached a dead end. A peace agreement negotiated in Stockholm in 2018 called for a ceasefire, the support of humanitarian aid by all parties and the exchange of prisoners. However, only a few months after the agreement was signed, international observers (Guardian 2019) reported that the agreement was not being complied with. Human rights organisations report regular human rights violations and war crimes on both sides. The humanitarian situation in Yemen has been catastrophic for several years. In 2017, a cholera epidemic broke out that infected around one million people. Around 80 per cent of the population is dependent on humanitarian aid (Clarke G. et al., 2019). The supply of drinking water is essential to ensure the survival of the rural population. Polluted water is a major risk and can cause serious diseases. Diarrhoea in particular is one of the most frequent causes of death among children under the age of five, which can be caused by drinking polluted water. Every day, more than 700 children worldwide die of diarrhoea related to polluted drinking water and lack of sanitation (UN Water, 2019). Conversely, according to UN-OCHA, improving water supply and water quality is an effective way of containing epidemics such as cholera in Yemen and improving the nutritional situation. In rural Yemen, only 22 per cent of the population are connected to the water supply (Clarke G. et al, 2018). The majority have to fetch water from springs, wells and rainwater collection basins in the surrounding area and carry it to their homes in canisters. It is almost impossible to avoid contamination of the water during filling and transport. This is also evident from the incidence of diarrhoea and recurrent cholera epidemics. Many families do not have the financial means to invest in improving their own situation. About 80 per cent of Yemenis live on less than two US dollars per day and thus below the poverty line (Clarke G. et al., 2018).

With your donation today, families in need in Hajjah and Ibb get access to clean and filtered drinking water. With domestic water filters that are robust, easy to use and do not incur running costs, the supply of clean water can be significantly improved. The filter allows families to treat the water so that family members, especially children, are less likely to become ill. In particular, water-related diseases and epidemics such as cholera are contained. This measure improves the quality of life and reduces illness-related absences at school and at work. 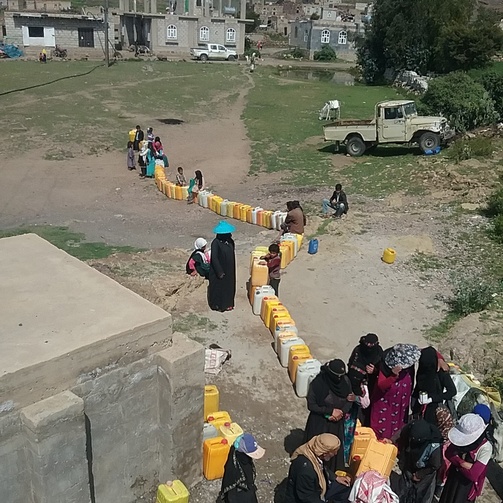 In the 16th century, Yemen was the only country exporting coffee. It came to be known be the name of the major port city: Mocha.