Day 11
Three minutes IT classes for a child in Afghanistan

Power on at the schools of Kabul

Computer classes for pupils in Afghanistan

"What do you want most for your school?" Aria has been asking many of her pupils. "A computer" is the answer she often gets. Although the Khwaja Boghra School is extremely short on classrooms, so that some classes have to take place outside even when it is hot and cold, this is the greatest wish of many pupils. This is not at all surprising, because in Afghanistan, as in Germany, computer skills are usually a prerequisite for attending a secondary school, university and many vocational training courses. The school is located in one of the poorest districts of Kabul. It is a furnished makeshift school and many subjects in the curriculum cannot be taught because of a lack of rooms and teaching materials. As a result, there is no computer science class. Even after finishing school, relatively few of the pupils have any computer skills. This is a major obstacle for them, as it makes it much more difficult to access higher learning opportunities.

IT classes for pupils to counteract the digital illiteracy rate.

Extra teachers provide lessons for the pupils, while at the same time training more teachers in working with computers.

Number of lessons that the teachers are able to teach.

The pupils and their teachers have relevant IT skills and computer classes become a part of the standard curriculum.

Better educational opportunities as well as career prospects for the pupils.

Afghanistan used to be known in many countries for its many landmarks and attracted tourists from all over the world in the 1960s and 1970s. This development came to an end in 1978, when the Communist Party of Afghanistan took over the country. This led to riots among the population and the interference of the Soviet Union in the conflict. The Soviet Union supported the establishment of a new Communist leadership, while other major powers such as the United States supported anti-Soviet resistance groups in Afghanistan. The resistance parties grouped around Islamists and other religious leaders. After the withdrawal of the Soviets from Afghanistan, a civil war broke out in 1992, which led to the Taliban taking control of the country and turning Afghanistan into an Islamist emirate. In the fall of 2001, the Taliban government of Afghanistan was overthrown by a US-led military operation. A new government was established and Taliban supporters fled to Pakistan. From there, the Taliban continue to wage an armed conflict with the new Afghan government. Due to the prolonged fighting, political unrest and destruction, the country is still in an unstable situation 40 years after the beginning of the war. The poverty rate is very high. According to the United Nations, 98.2 per cent of the population has less than 3 euros per day (UNDP, 2018). Approximately 70 per cent of schools were destroyed by war, and despite mandatory schooling, only about 30 per cent of children between the ages of seven and 13 attend school. Consequently, the illiteracy rate is above 70 per cent (LiPortal, 2019). If pupils are privileged to go to school despite their everyday challenges, learning is made more difficult by the lack of basic facilities. This inadequate educational situation reduces the children's chances of escaping their precarious situation in the long term. Due to many recent terrorist attacks, the promotion of the education sector has receded into the background as a political priority. Nevertheless, the country and especially the children need support right now in order to be able to rebuild the country as soon as the political situation has truly become stable.

Your donation today will provide computer courses for students of the Khwaja Boghra Primary and Secondary School in Kabul. The courses will be a part of the normal curriculum and thus help to counteract the 'digital illiteracy rate'. The courses teach pupils computer skills as an important key qualification. Two additional teachers each give a computer course of two hours per day. All 9th year pupils will thus acquire basic IT knowledge in practical computer lessons on a weekly basis. At the same time, future teachers will be present and learn computer skills at the same time. In the following years, they will then take a step-by-step approach to actively designing their own computer lessons. 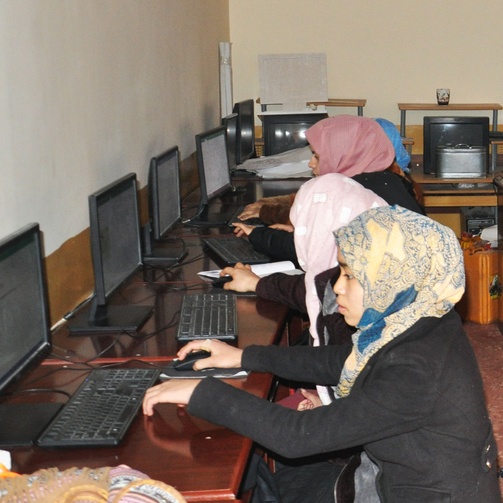 Afghanistan is in the bottom third of developing countries. In spite of mandatory schooling, only about 30 per cent of children between seven and 13 years old go to school.